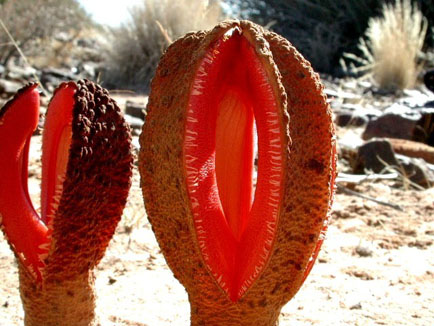 This odd character lacks photosynthesis, smells like feces, and was named after its fungus like resemblance. Yet this odd character is no fungus, it is a parasitic plant. For most of its life Hydnora africana resides under the soil in Africa. There it grows stealing the nutrients directly from the roots of other plants.[1] When it is ready to flower it pops up from the ground luring dung beetles into its cavity for pollination. Interestingly, some research suggests that there is a temperature rise within the flower; likely as a way to heighten its stench. Eventually Hydnora africana opens up (as seen above) allowing the beetle to escape, and spreading the plants pollen.[2]

Do you know any fun facts or tips?